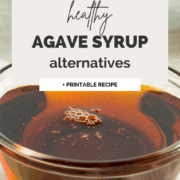 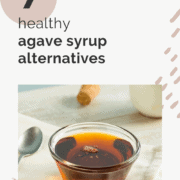 Have you ever been in the middle of a recipe only to realize you were out of agave syrup? Same. Save yourself a trip to the grocery store with one of these agave syrup substitutes. Bonus: they may even be better for your health.

Many people wonder, can I substitute honey for agave?

Yes. Honey has a slightly thicker texture, but it still makes a good substitute for agave syrup in baking, desserts, sauces and marinades.

It does have a stronger flavour profile than agave. So, you’ll need to decide whether your recipe can work with honey flavour notes.

Like agave, raw honey is as a natural sweetener. That means it provides nutritional advantages and health benefits that refined sweeteners do not.

Honey, in particular, is rich in anti-oxidants, B vitamins, beneficial enzymes, amino acids and immune-boosting properties. That's exactly why you've been offered honey in your tea when you're sick!

One thing to note is that honey loses some of its nutritional benefits when heated. So, if you're using honey for the health advantages, it's best to use it as a topping.

Molasses is a good sub for agave syrup. It's a thick liquid with a sweet, warm flavour that's similar to maple syrup and stronger than agave.

Molasses is a natural sweetener. That means it's free of added sugars and provides some nutritional benefits. It also means that our blood sugar spikes less rapidly after consumption.

Molasses is a good source of iron, selenium, and copper, all of which help us maintain healthy bones.

Coconut nectar is the syrup derived from the flowers of the coconut palm. Coconut nectar makes a good sub for agave nectar because it has a syrup consistency.

Its flavour profile is rich in caramel notes, and a little less sweet than agave. It's an ideal swap for agave in baking and desserts.

Like most of my recommendations, this is another natural sweetener. It's free from chemical processing and has a low glycemic index score compared to most other sweeteners.

Brown rice syrup (also known as maltose syrup) is a liquid sweetener that works well as an agave syrup replacement in baking and in condiments. Its sticky texture also makes it ideal for recipes that need a binding agent, like homemade granola.

Its flavour profile is significantly less sweet than agave syrup. Instead, it has a nutty flavour that is reminiscent of butterscotch. So, increase the amount of brown rice syrup used to taste.

Brown rice syrup has a slightly higher GI index score than agave syrup, but it is still a natural sweetener that is both fructose and gluten free.

Maple syrup is another suitable sub for agave nectar. Because its texture is similar, it can be swapped easily for baking, cooking and drizzling.

However, if you have a sweet tooth, you may want to add a little extra maple syrup because it isn't as sweet as agave.

Maple syrup comes directly from the sap of a maple tree. Because of this, it offers up some powerful health benefits. It's high in antioxidants and important micronutrients like riboflavin, zinc, magnesium, calcium and potassium.

Just be sure to read the label to make sure you're buying 100% pure maple syrup rather than pancake syrup that's filled with all sorts of artificial chemicals.

Liquid stevia is another agave syrup alternative. It is 300 times more sweet than table sugar. That said, it has a slightly liquorice aftertaste, so it's better to use in bold flavoured recipes that can mask this.

Because liquid stevia is sold as drops, it's useful when needed in smaller quantities like in drink and cocktail recipes.

Stevia is a natural sweetener made from the leaves of the stevia rebaudiana plant. It is both carb and calorie free, so can be a good option if you're trying to manage your weight.

The most natural sweetener you can opt for is fruit. So, if you're only looking for a healthy agave syrup alternative, the use of dates may just be the perfect option. They'll be sure to boost your fibre and antioxidant intake too.

If you want a syrup like consistency that's closer to maple syrup, you'll need to reduce your dates using my recipe below. Alternatively, you can buy this syrup in middle eastern stores.

What is agave syrup?

However, agave nectar technically refers to the sap extracted from the agave plant. Agave syrup on the other hand, refers to the product found on grocery store shelves. It is processed using heat, which destroys any beneficial health effects found in the nectar.

The agave syrup found on your grocery store shelves is not the same agave nectar used for centuries in South America. It is treated with heat and enzymes, resulting in a highly refined and unhealthy end product.

It does have a low GI score, which can be helpful to diabetics or others trying to manage their blood sugar levels.

That said, it is higher in calories than table sugar and is extremely high in fructose. Since our liver is the only organ that can metabolize fructose in high amounts, excess consumption of agave syrup can be hard on our livers and even lead to insulin sensitivity in the long run.

Because of this, I think it's a safer bet to use other natural sweeteners like the ones listed in this article.

How to use agave syrup

Here are some of my favourite recipes that use agave nectar or an agave syrup alternative:

Have you tried any of these subs for agave syrup? Do you have any of your own?Please take a minute to leave a comment below.

« 10 Healthy Maple Syrup Substitutes + Recipe
Air fryer vs pressure cooker: which one is right for you? »