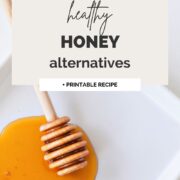 Have you ever been in the middle of a recipe only to realize you were out of honey? Same. Save yourself a trip to the grocery store with one of these healthy honey substitutes.

You can easily substitute maple syrup for honey because it has a very similar texture and consistency. It's an alternative that works well in baking, cooking and drizzling.

Maple syrup comes directly from the sap of a maple tree. It contains antioxidants and important micronutrients like riboflavin, zinc, magnesium, calcium and potassium.

Make sure you're buying 100% pure maple syrup instead of pancake syrup, which is primarily made with artificial chemicals.

Agave syrup is a good honey substitute. That's because it has a thick consistency and flavour quite similar to honey, albiet with a slightly more bitter aftertaste.

While at one point considered one of the best natural sweeteners, agave nectar is more debated as of late. Research now suggests that its extra high fructose content may reduce insulin sensitivity. It is also higher in calories than table sugar. For these reasons, I recommend using agave nectar in moderation.

Coconut nectar is a vegan honey substitute that's derived from the flowers of a coconut tree. This syrup makes a good honey replacement because it has a similar texture and consistency to honey.

Coconut nectar has a caramel-like taste. Although, it is a little less sweet than honey due to its lower sugar content. While good news for your health, you may want to increase the amount of coconut nectar used when replacing honey to reach your desired level of sweetness.

Like most of my recommendations, this is a natural sweetener. It's free from chemical processing and has a lower glycemic index than most sweeteners.

Molasses is a good honey substitute. It's very sweet, with a warm flavour that's fairly similar to maple syrup.

It has an incredibly thick consistency. For that reason, instead of a 1:1 ratio, you may prefer to use a little less molasses than honey in your recipe.

Molasses is a natural sweetener. That means it's free of added sugars and offers up some nutritional benefits.

Brown rice syrup can be used in place of honey in a 4:3 ratio. So, for every ¾ cup of honey, substitute 1 cup of brown rice syrup.

This liquid sweetener has a sticky texture that makes it a good honey replacer in recipes that need a "glue", like homemade granola.

It has a nutty flavour that is similar to butterscotch and is significantly less sweet than honey. For that reason, you may want to increase the amount of brown rice syrup used to reach your desired level of sweetness.

Barley malt syrup is a natural sweetener that's produced from barley. It is a very thick syrup that's even more dense than molasses.

Honey is twice as sweet as barley malt syrup, so when using barley malt as a substitute, you'll want to double the quantity.

Because it is a natural sweetener, it offers up some nutritional advantages. But, it's quite high in maltose, so should be used in moderation.

The most natural sweetener you can opt for is fruit. So, if you're looking for a healthy honey replacement, the use of dates may be the right option.

Bonus: dates are full of fibre and antioxidants too!

To get a syrup like consistency, you'll need to reduce your dates using my recipe below. Alternatively, you can buy this syrup in middle eastern or health food stores.

How to use honey

Here are some of my favourite recipes that use honey or a honey alternative:

Have you tried any of these subs for honey? Do you have any of your own? Please take a minute to leave a comment below.

« Air fryer vs pressure cooker: which one is right for you?
Sous Vide Flank Steak »