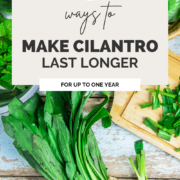 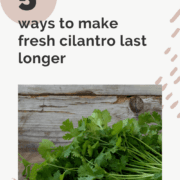 Cilantro is easy to dry. You can use an oven, microwave or dehydrator to turn leftover cilantro into a dried herb that can be used for up to one year. If you don't have time to dry it, you can also freeze cilantro for up to six months.

While that sounds straightforward, there are a few things you should know about each of the methods listed above. Read on for all the details you need to successfully preserve your fresh cilantro.

How to dry cilantro in the oven

Okay, so you want to get more than a few week's worth of use out of your cilantro. I feel you.

The most common way to dry fresh cilantro is in your oven. You can dry the herb by baking it at 300 F. You'll then crush it and store it in a spice jar for up to one year.

Tip: Every oven is different. Turn the temperature down to 250 degrees F if the cilantro is burning quickly rather than dehydrating.

How to dry cilantro in the microwave

If you don't have an oven or are feeling crunched for time, then your microwave can take on the job.

Drying cilantro in the microwave is the easiest way to preserve the fresh herb. All you need is a microwave, a plate and paper towel. Within 2 minutes you'll avoid food waste and save yourself the expense of buying new cilantro.

How to dry cilantro in dehydrator

If you're lucky enough to own a dehydrator, it's time to pull it out. Here's how to dehydrate cilantro in four easy steps: wash, dehydrate, crush, store.

Tip: Dried cilantro loses some of its potency. For maximum flavour, store dried cilantro leaves whole. You can then crush them just before use.

How to freeze cilantro

There is one other way to preserve cilantro for long term use - and that's freezing it. You can freeze this herb for up to six months.

Tip: If you want to save on time, you can cut step 2. Instead of freezing on a baking sheet, freeze directly in the freezer bag.

How to store fresh cilantro

Storage starts in the grocery store. When you pick fresh produce, it will last longer at home. Here are the factors you want to consider when purchasing cilantro:

Okay. So, you have a fresh bunch of cilantro. Now what? You're actually going to place them in a jar of fresh water - a lot like fresh flowers.

Tip: Do not wash the herb until you are ready to use it. The moisture can cause the leaves to turn slimy and cause the cilantro to spoil more quickly.

Is coriander and cilantro the same thing?

While both come from the same plan, cilantro and coriander actually have different tastes and different uses in cooking. The leaves and stems of the coriander plant are cilantro. The seeds of the plant are called coriander seeds, which can be crushed into coriander powder.

Now that you know everything about buying, storing and preserving cilantro, it's time to start cooking with it.

What is dry cilantro used for?

Well, both fresh and dried cilantro are a popular herb in Mexican, Asian and Caribbean cuisine. It has an assertive flavour that is either loved or loathed by most (personally, I'm obsessed...). It's flavour is often complimentary to spicy foods.

I’ll share some of my favourite recipes using fresh cilantro below. But to make you the master of your own kitchen, I want to share a few ideas on how you can consider using fresh or preserved cilantro.

How much dried cilantro equals fresh

As a general rule, the ratio for fresh to dry herbs is 3:1.

Check out some of my favourite recipes using cilantro below: